As it is festival season (very funny analysis here by TEA) I thought I'd indulge myself by posting up a couple of clips.

I was at Warwick Folk Festival earlier this week and will be going back over the weekend (we live very close so there's not even any camping involved :-))

Billy Bragg headlined on Thurday evening and it was a great night. He's a long time musical hero of mine, the crowd were really behind him and I thoroughly enjoyed myself. He gave a great speech about the Labour leadership battle, expressing respect for Corbyn and disdain for the Blair view of things .... followed by  "UpHill - Socialism of the Heart". Wonderful evening .


One track he didn't get round to was "Great Leap Forward" so I sought it out on YouTube when I got home. The version below is a couple of years old so the lyrics aren't quite current but you'll get the gist.

(hackle alert for some out there I guess, but as weenie reminded me, it's my blog so I can post what I want, and it does sort of cater for the cyclists too :-))

The budget left me depressed, demoralised and completely down. I was a "winner" financially but feel patronised (who really believes all that "working people" nonsense when the cuts to tax credits will hit so hard) and disenfranchised.

I work alongside emergency duty social workers earning less than £40,000 who have to deal nightly with suicidal people wandering the train tracks, children needing emergency foster care and mental health patients who should be sectioned for their own protection, needing beds that no longer exist. Despite coping with an incredibly stressful job these dedicated professionals, along with the rest of the public sector (nurses, teachers, librarians, firemen) are now being told that we are not doing work that is worth a jot to the country.

Email ThisBlogThis!Share to TwitterShare to FacebookShare to Pinterest
Labels: Thoughts

If asked to define our aims when investing, most of us would be able to give a reasoned reply and describe an outcome we are trying to achieve, whether it's to buy a house or retire early. We know how much we need (well roughly :-)) and we are making plans to get there. 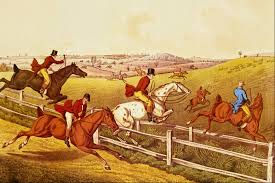 But, like the huntsmen with their hounds, some investors seem to chase profit for it's own sake and delight in making a killing even when they have no real use for the spoils. Accumulation and growth is the thing, the excitement of putting another "0" onto the bank balance, just like the thrill of the chase and watching the dogs kill the fox, are what it's all about. Investing has become a sport in which owning a large amount, or making large gains, are aims in themselves and not means to an end. In fact, after a certain amount of wealth has been generated, there simply can't be any other "end" than to make more of the same. When you are able to have anything money can buy with the click of a finger, making more money becomes the only challenge.

Then there's those investors who treat investing like a game of chess, a challenging intellectual pursuit with sophisticated tactics and gambits. The figures at the end of the balance sheet are almost academic, rather than a practical goal, because that's what the whole exercise has become.

Although these types of relationships with investing can seem alien to most of us, who just aim to have enough money to do what we want in life, there is a further attitude towards money that also often results in "having too much" and which is even more toxic from an economic point of view, and that is cash hoarding.

We all know about the gradual shift of the world's wealth into the hands of the 0.1% and how it has continued to the extent that they can't possibly spend it and put it back into the economy. However it also seems that the super rich aren't investing as much as we might expect them to either. They have stopped building business to the extent that they were "meant to" by the economic model and are becoming more content to let their capital feed on and nourish itself.

Cash hoarders have bloated bank accounts full of "stuff" they have no use for. They take delight in counting it and checking that it's all still there, rather than in what it can do to improve their lives. There is an argument that these people are to be pitied just as much as those who fill their homes with old newspapers and other rubbish. However, on the other hand, a TED discussion concludes that: " the harm caused by a wealth hoarder is generally imposed upon their community while for other forms of hoarding it is the hoarder themselves who bears the brunt of that behaviour."

Those of us in the PF/FiRE world often (and rightly) pour scorn on the need people seem to have to buy more and more "things" and have more and more "stuff", but stock piling wealth for its own sake could be regarded as just as much, if not more of, a sin. I see it time and time again on MSE forums - people who obviously have far, far more than they need raising anxious questions about what to do with the rest to make sure it continues to grow. I struggle to see how having all that money is enriching their lives (although Freud could probably give me a theory :-))

In the budget next week George Osborne is expected to introduce more incentives for building, keeping and passing on wealth for those of us who are fortunate enough to be in a position to do so. Maybe he should be concentrating on encouraging us to see the benefits of knowing when we have enough and giving us ethical and effective ways of investing it back into the world we live in.1