Divesting and the Carbon Bubble

I was interested to read recently about Norway's largest sovereign wealth fund, the Government Pension Fund Global (apparently the world's richest fund) dropping some of its shares in fossil fuel funds.
This wasn't an "ethical" move, as such, but one that was driven by the belief that the fund was in danger of being invested in companies who would be unable to realise expected profits without breaching legislation outlawing the removal of the remaining fossil fuel reserves. This move is:

"part of a fast-growing campaign...over $50bn in fossil fuel company stocks have been divested by 180 organisations on the basis that their business models are incompatible with the pledge by the world’s governments to tackle global warming. But the GPFG is the highest profile institution to divest to date."

However it still invests heavily in fossil fuels and has since reinvested some of those resources into oil and gas. The general trend, though, is encouraging and the pressure on large investment bodies to reassess and justify where they put their money is definitely growing.

Part of this pressure comes from warnings such as that made by Mark Carney (Bank of England governor) back in October that "most carbon fuel is unburnable". His argument is supported by evidence from studies into the concept of the Carbon Bubble which conclude that the shares of companies involved in fossil fuels are overvalued due to the fact that their value is calculated with the "assumption that all fossil fuel reserves will be available to be consumed". Whereas in fact: 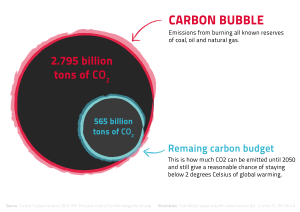 "... A series of analyses have shown that only a quarter of known and exploitable fossil fuels can be burned if temperatures are to be kept below 2C, the internationally agreed danger limit.

The divestment movement is growing in response to this realisation. Members of several large Danish pension funds are to be asked to vote on divestment and, closer to home Boris Johnson has been called on by the London Assembly to "change the city's investment policy to exclude fossil fuels."

Now, it will be no surprise to anyone out there that I am a Guardian reader but I make no apology for the number of references to the paper as a source for this post. The current editor (Alan Rusbridger) is stepping down over the Summer and, when looking back over his career he finds that he few regrets

...  except this one: that we had not done justice to this huge, overshadowing, overwhelming issue of how climate change will probably, within the lifetime of our children, cause untold havoc and stress to our species. So, in the time left to me as editor, I thought I would try to harness the Guardian’s best resources to describe what is happening and what – if we do nothing – is almost certain to occur, a future that one distinguished scientist has termed as “incompatible with any reasonable characterisation of an organised, equitable and civilised global community”.

My last quote given below comes from a particularly powerful article which makes a key point by questioning the effectiveness of relying on broader reasons to persuade investors to divest due to one of the key characteristics of the typical investor -  how they are prone to isolate the process of investing from the actual purpose of money and the part it plays in their lives.

"Indeed, investors often fetishise monetary returns without thinking about the world in which those monetary returns will have to be spent. This is partially due to misunderstanding the nature of money, which is best thought of not as an independent “thing”, but rather as a claim upon society. What is the point of amassing such monetary claims if the society in which I can use them in has become a lot less liveable?"

So many people worry about inheritance tax. They go through all sorts of loops to pass on their pensions and property and preserve their assets for their children without even acknowledging the truth that none of this will be of much help to those children in a world completely destabilised by climate change. Logic should now dictate the course of action to both institutions and individuals. No-one should need persuading any more. In the case of climate change I fear we have already got past the stage of fiddling our way through the burning and it's now just a matter of how much damage limitation we can plaster over the wound.

This particular issue is very close to my heart but the quote about the way that investors "fetishise" money also sparked my interest in a more general way. I see it in myself, the slavish obsession with tweaking spreadsheets, calculating strategies to claim back and avoid paying tax (incidentally something I'm beginning to feel more and more uncomfortable with - I have a feeling that I should be examining my own "fetishistic" behaviour in this particular arena and comparing it with the kind of world I actually want to live in), fiddling about trying obsessively to lower charges and generally spending lots of my valuable "free" time doing things that I have not "costed" against the returns.. maybe one for a later post.

Graphic via Wikipedia
Posted by Cerridwen at 11:07